As I am sure we all are.

Yes, this year has been crap, to put it bluntly, but some things were downright fantastic. I now have a grandson! He's 7-1/2 months old now, three teeth coming in, crawling backward, has the tantrums of a two year old and loves the TV remote and anyone's cell phone he thinks he can get a hold of. I didn't realize what love looked like until I saw this blonde haired, blue eyed boy! It's a whole different kind of love!

Our property was finally fenced securely. My daughter did the whole thing mostly by herself; that was after we went and bought a brand new tractor and auger, so she could dig the holes. The other guy we had come out was a fantastic fence builder...in his own mind. She had to re-do most of what he put in. Like they say, if you want something done right, do it yourself.

We have put kennels in the barn instead of stalls. We will be raising GSD's for search and rescue, police work, and whatever else someone might need a high drive dog for. My daughter is taking a class on training them, because her trainer has decided he wants to retire I guess. He couldn't do anything with that dreaded virus running around, so everyone was left to their own devices. (See the above comment about getting stuff done right) And by the way...I say "we" like I'm doing the work with her! I watch my grandson for her while she does the hard stuff!

I put a reserve on a Rat Terrier. He will be flown up to me from Texas at the end of next month. I will be raising those, there's too many rat's around here, and no one at all raises Rat Terriers here. I am going to try to fill the void. I can't handle the big dogs. The Rat Terrier is more my ability! 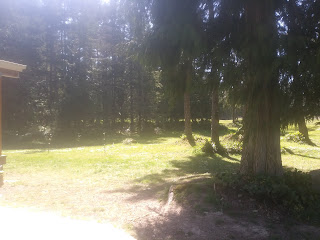 Here's a picture of the property without the snow.
So hopefully, I can get on my computer to do more of this and less of the games that I have been playing. Anything to keep my mind occupied and away from the news of the daily stuff going on out there.
I will see you all in the near future...fingers crossed!👀

What a difference a year makes... 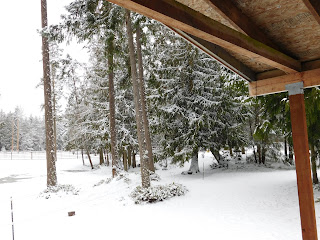 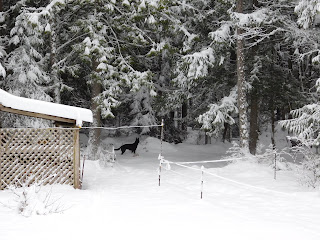 So...A year later, from my last post up here, and the post before that showing our nineteen inches of snow. We got about nine inches this time, and it lasted a few days. Not the mind numbing snow of 02/19!

And we are in a different place! I just sold my two properties, and bought one bigger one. The old property had two houses (and two different lots). This property has one house, more land, a real barn and a shop that towers over the house. Not to mention the beauty of this place! We are at 600' now. It is just a tad chillier, but not a problem, I stay in when it's too cold anyway!

We are having problems with the animals staying in the pastures they were assigned. I have to get a fencing person up here to fix a proper pasture for my minis, goat and sheep. I also don't care for my chickens coop placement, but that can't be changed for now. At least they are housed. I just don't like that I have to drag a 150' hose from the spigot to the coop to give them water. I will change that soon enough, but the bigger animals are my main concern right now.

My daughter and I are both now limited to what we can do as far as the heavy stuff. I had surgery almost a month ago and I can't pick up anything heavier that ten pounds. That leaves me a lot of not picking things up. My daughter is six months pregnant and is starting to feel the strain when she goes to do certain things. In four more weeks I can do the picking up and she can sit back. She's been picking up my slack. I have to pay her back.

That's all the news for now, More to come and hopefully some great pictures of spring stuff at the new place!

So Much Water Under The Bridge!

This is an embarrassing post! I really do not know how I transitioned out of my blog visiting. I have added a few new Internet BFF's and then didn't bother to come back and read about how EVERYONE is doing. I am ashamed of myself and I apologize to all of those Besties I had set aside.

So much has changed here. My place has a name now. I always feel that property, homesteads or even a small backyard in the midst of the city needs a name. Just a quirk I have. Maybe it stems from the place my parents had at a lake in California with three other families; they called it Noisey Acres and in it's heyday, it was definitely noisey! Parties abound every weekend!. Since my dad passed almost five years ago, my sisters own half of the acres...it's not noisey anymore. Boy that took me away from home! Anyway...I have named my place "Funny Farm". It seems that there is something to chuckle about daily. Mostly the antics of the critters who live here.

Speaking of critters. We have had lots of comings and goings with all but the dogs, cats and fowl. The horses and goats ebb and flow. My daughter has taken in so many neglected horses mostly handed to her when she goes to do her farrier work. Seems so many people here take on animals of size not realizing what kind of work needs to go into them to keep them happy and healthy. She just got done rehabbing an adorable little donkey called Rosita. We called her Eeyorita while she was here because she had this "thanks for noticing" attitude. Her feet were atrocious! Rosita went home yesterday after being here for two months. (she was not neglected by her mom, her mom got her to get her back up to health) She was walking so much better and had a slightly better outlook on life and the people around her. Still as stubborn as they come. Luckily she is smallish and not too hard to push, pull, coax into the trailer. Other horses have dropped in on their way to new homes. We still have an old lady mare and a very young one here passing through. As soon as they are rehomed, my daughter is taking a break from horses for a while. 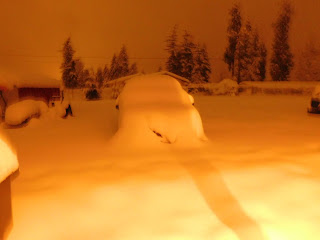 This was our winter. We normally get from 0 to 4 inches of snow. There was 19 inches on the Funny Farm for longer than I care to remember! My daughter's boss was kind enough to drive the six or so miles from her ranch to our farm on her tractor to dig us out. We could not leave the property for about five days, it was getting boring!

So here we are at Spring. I have to get my camera out and start taking pictures, so my posts are not so mundane. I am back, with so much to share. I am going to do it a little bit at a time. I'm not into writing a full novel here. I will be visiting everyone a little at a time to catch up. I really have missed you all!
Posted by claudia at 8:13 AM 4 comments: 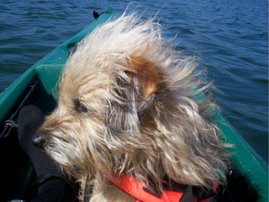 Feeling the Breeze in My Whiskers